5 volunteers met in Summerfields car park on a miserable morning on Saturday 4th December.  We covered the surrounding area including Colshsaw Drive and collected 11 bags and some recyclables (which were taken home and put in the grey bins)

c) Reported several incidents of fly tipping to ANSA.  One of them, on Colshaw Drive, was not on council owned land and so ANSA informed the housing association.

d) Held a meeting to review the roles on the committee

e) After some further committee discussion about levels of insurance cover, we cancelled the recently purchased policy with Zurich and renewed with our original provider.

f) Started discussions about how we can support some year 9 pupils at the high school who want to do litter picking for the volunteering section of their Duke of Edinburgh award.

Wishing you all the best for 2022 and hope to see you at the January picks.

7 volunteers met at The Honey Bee on Wednesday 3rd November.  We covered the surrounding area including Altrincham Road and collected 9 bags.

11  volunteers met at the Parish Hall on Saturday 6th November including some children who came along with their parents. We covered the Parish Hall Car Park, The Carrs down to Twinies Bridge, Cliff Road, Old Road, Styal Road, Manchester Road and the footpath along the Bollin near The King William roundabout. 12 bags were collected.

As always, we were pleased to welcome some new faces.

f) Provided equipment to David, an employee at “Pets At Home, so that he could litter pick for a day as part of their “Our World Better Pledge” initiative.  Great work David.

Hope to see you at our December picks – new volunteers welcome.

9 volunteers met in Summerfields Car Park on Wednesday 1st September and picked in the  vicinity of Dean Row Rd. We collected 9 bags altogether plus a wooden board. 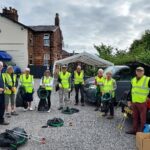 At  least 14 volunteers met at The Farmer’s Arms on Saturday 4th September.  We covered the surrounding area as well as venturing further afield and picking at the back of the row of shops from Sainsburys to Hoopers, Sainsbury’s car park, the area around Gorsey Bank school, Mobberley Road, Adlington Road, Hawthorn Street, Little Lindow etc. We estimate that 16 bags were collected altogether.  We would like to thank Chelsea Flowers for providing hot drinks to our volunteers after the pick.

We were delighted to see some new faces.  Well done everyone.

b) Continued with our solo picks.
c) Informed ANSA of fly tipping incidents – e.g. a mattress on the A34
d) Continued to liaise a local business about a potential big sponsorship deal
e) Responded to a contact made by the manager of Hickory’s who is interested in offering support to the Clean Team.
f) Started a project to encourage local businesses to sponsor us by donating £50 to our funds.  In return they will receive a window sticker and a mention on our website.  Thanks to our business co-ordinator Peter for his efforts on this.
g) Designed 2 separate prototypes for a trolley which could support 2 bags.  This would not only assist those members who struggle with the weight of the litter but would also allow us to more easily recycle cans, plastic bottles and glass bottles.  Recycling is something we ought to be encouraging more of.  Some of us take a smaller carrier sized bag with us – and collect cans and plastic bottles (which are very light) which we can take home and put in our grey bins.  The huge energy required to extract aluminium is really bad for the environment – so it will be great if we can help make sure that this kind of waste is not “single use”.
h) Started to consider how we might re-work a banner which could be used to advertise our activities
i) Battled with bureaucracy to try and change the committee members who can sign off cheques – due to recent changes to the committee.

Hope to see you at our October picks – new volunteers welcome.

a) Continued with our twice monthly litter picks:

Held a litter pick at The Honey Bee on Wednesday 4th August.  We covered the surrounding area including Altrincham Road down towards the airport tunnels. Lovely to see some very young helpers.

Despite the poor weather, 9 volunteers met at Bank Square on Saturday 7th August.  We covered the town centre including the area around the railway station, the Leisure Centre, Church Street, the roundabout near the King William pub, Manchester Road.  At least 12 bags were collected.  We were delighted to welcome 3 new volunteers to this pick.

b) Continued with our solo picks.
c) Responded to interest from some new volunteers
d) Responded to a request from a local brownie group to borrow our equipment
e) Re-organised and cleaned the equipment held in our storage bunker
f) Liaised with a local business about a potential sponsorship deal
g) Written an article that we hope to get published in the “Inside Wilmslow” magazine
h) Had an article about us published on wilmslow.co.uk :
https://www.wilmslow.co.uk/news/article/21762/cleanteam-are-back-sprucing-up-the-streets
i) Responded to a contact made by Radio Manchester about a possible interview with the Clean Team.

Hope to see you at our September picks – new volunteers welcome.

a) Resumed our scheduled litter picks 😊

6 volunteers met at Lindow Common on Wednesday 7th July. The area covered included Lindow Common (in time for the Wilmslow in Bloom Judges on Thursday 8th July 2021), the outside perimeter of the Common, Lindow Common car park opposite Hickory’s Restaurant, Morley Green Road (both sides), Mobberley Road, the smaller Lindow Common car park adjacent to the houses on Racecourse Road, the forecourt of Wilmslow Railway Station (again as part of the preparation for the “In Bloom” judging), King’s Road and Altrincham Road (all the way up to Kennerley’s Lane), Broad Walk, Priory Road, Alton Road and Alderley Road (around the bp garage).  At least 7 bags were collected.

b) Continued with our solo picks.
c) Responded to interest from some new volunteers.
d) Held a committee meeting on 21st July
e) Progressed an order for some extra equipment (using the grant that we recently received from Wilmslow Town Council)
f) Reported some fly tipping to ANSA
g) Put out a request for volunteers to lead the occasional pick – please let us know if you are willing to get involved.

Hope to see you at our August picks – new volunteers welcome.

With the summer holidays almost over, 11 volunteers met at Bank Square on Wednesday 4th September. We covered all of the town centre, down as far as Sainsbury’s car park, the Leisure Centre, the Station, the Carrs, and the town end of Chapel Lane.  We collected at least 9 bags along with some recyclabes.

One of our volunteers discovered that one of the benches from inside Sainsburys was lying behind the cycle rack. She asked a supervisor why this was and was told, ‘Not our bench’. She checked the bench again that it was theirs – it had a plaque dedicated to a former employee, Harold Jupp. This time, a manager agreed and said it would be brought back inside!

We were pleased to welcome a new volunteer at Wednesday’s pick.

9 volunteers met in Summerfields car park on Saturday 7th September. We focused on the surrounding area including Dean Row Road, the slip road and footpath alongside the A34, Colshaw Drive (starting at both ends but not quite reaching the middle) and Oakenclough Close. We collected 14 bags of litter, a tyre and some recyclables.

There seemed to be less litter than normal on Colshaw Drive. Some of our volunteers were told that the local residents association have been doing their own litter picks and have had equipment donated by CEC so that they can make this a regular event. We are going to try to make contact with them again so that we can liaise and co-ordinate future litter picks.

We found a mattress that had been fly-tipped on the service road by rear entrance to the cemetery. We will be reporting this to ANSA.  A few months ago we made contact with Network Rail to report the litter on the embankments where Dean Row Road crosses over the railway. We checked progress today and unfortunately they have only cleared the easy bit where there are steps down. So – we will report back to them and see if the other 3 embankments can be dealt with.

We collected at least 23 bags of litter at our 2 scheduled September picks along with some more bags collected by our voluneers on solo picks.

Well done everyone – hope to see you in October.

7 volunteers met at Summerfields on Wednesday 2nd and collected 14 bags of litter and 2 car wheel trims in the surrounding area. A big thank you to Leanne Harrad from Holiday Inn Express who came along again to help us – we really do appreciate any help from the business sector.

Hopefully a few more volunteers will be available for the October picks.

6 volunteers met at the Coach & four and spread out in different directions.  We focussed on Alderley Road, Bedells Lane, part of Chapel Lane, Albert Road, Hawthorn Street, Water Lane, Altrincham Road, Holly Road, Greenway, Broadway, Parkway and the roundabout on the A34 near the footbridge.

We collected about 10 bags of rubbish altogether.

The general feeling is that we are making an impact.