Before summarising our August picks, it is worth mentioning a couple of extra litter picks that we did in July :

1) 5 volunteers helped clean up after the Wilmslow show on Monday 9th July. We collected 5 bags altogether.

2) Several volunteers performed a litter pick on the evening of Monday 23rd July in preparation for the annual “Britain In Bloom” judging the next morning.  This is an event which we have been involved with for the past few years. We collected 15 bags altogether.

9 volunteers met at The Honey Bee on Wednesday 1st August for the first of our 2 scheduled monthly picks. We cleaned from the junction with Nansmoss Road to the tunnel mouths. We also covered the pieces of old road behind the Airport Inn, and the unnamed road leading off Altrincham Road towards the barrier for Manchester Airport Fire Station. The verges here were particularly bad – it is known that truck drivers pull in here to have a break. We also did part of Altrincham Road by the Jim Edison playing fields.  We checked Nansmoss Road, Mobberley Road, and Morley Green Road which were all clean – thanks to the ongoing efforts of one of our volunteers (Liz). We collected 14 bags plus pieces of cardboard. Many thanks to The Honey Bee for allowing us to use the car park.

8 volunteers met at the Parish Hall on Saturday 4th August. We covered the Carrs, The Memorial Gardens and the surrounding area – spreading out as far as Grove Street and Water Lane. One volunteer headed off by car to cover Prestbury Road. We collected 11 bags altogether along with some recyclables.

So – 25 bags in our 2 scheduled August picks, 20 more in our 2 “one off” picks in July plus lots more by our volunteers who go out on their own in-between the scheduled picks

Thanks and well done everyone. 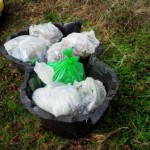 9 volunteers, including some of our newer members, braved the hail on Wednesday 6th April and met at Lindow Common.  We covered Lindow Common, Racecourse Road, parts of Kings Road and Gorsey Road, Priory Road, and Altrincham Road (both sides), from Gorsey Bank School to the Waters Corporation roundabout.

We met with the manager of the new Harvester Restaurant (and appreciated the offer of a free hot drink) to discuss their overflowing litter bins. The bins are owned by the Premier Inn but their manager thinks that rubbish is being deposited by the Harvester customers. Both managers will be addressing this problem. We decided to empty the two bins ourselves, rather than see the rubbish start to blow everywhere.

Altogether we collected 15 bags, a discarded pond liner, 4 sandbags, and various other detritus. This was all taken away by ANSA.

We also met a CEC Ranger, who told us how pleased he is with all of our help. He pointed out the area of the Common closed off by tape, immediately to the south of the car park, and indicated that, although litter is visible in amongst the thicket there, we should not go in. This is the site of one of the Victorian rubbish tips, next to the old Green Lake, and it was disturbed recently by one of the CEC landscape contractors by mistake. This will have to bulldozed in again.

In addition to our 2 scheduled picks this month, our volunteers have been out and about on their own. Sheila collected lots of old bottles and cans in the field by the railway arch near the A34 bypass.  Viv collected 2 bags around Carnival Fields, Gorsey Road, Priory Road and Manor Road. Dog mess has become a real problem in Carnival Fields this year because some people have started to throw the bags into the bushes.

On Saturday 6th April, 6 volunteers turned out on a lovely spring morning.  We would like to thank the King’s Arms for the use of their car park and the offer of a hot drink.  We covered the surrounding area including Alderley Road, the by-pass roundabout, Knutsford Road, Bedells Lane, part of Chapel Lane, Albert Road, Victoria Road and Holly Road.  We collected
14 bags, some hub caps and various various other bits and pieces. These were left next to 2 of the bins by the bus stops on Alderley Road and the council have been informed so that they can collect.

Finally, we have been told that the marshalls for the Wilmslow Half Marathon, plus members of Wilmslow Running Club, take litter clearance after the event has finished, very seriously and have tried to clean up along the whole of the course. This includes picking up litter which was already there before the Half Marathon took place.  We would like to thank them for their efforts.  Another of our volunteers, Jill, collected 2 bags in the area around Pownall Park on Sunday 3rd and again on Tuesday 5th. It was obvious that there had been a really good “post marathon” effort ahead of her.

So – 29 bags were collected at our formal litter picks this month plus at least 5 more from individuals.

Thanks for all your hard work everyone – apologies if your efforts haven’t been mentioned individually – but we do appreciate them.

After an enjoyable social evening at the Coach & Four on Monday evening, 4 volunteers met at Lacey Green Park on Wednesday for our first litter pick of the year. We covered the Lacey Green area including Twinnies Road, Barlow Road, Edgerton Road, and Mount Pleasant. 9 bags of litter were collected altogether.

7 volunteers were out in showery weather on Saturday 9th. We met at Bank Square and focussed on the surrounding area including the Leisure Centre and the Railway Station.    Parts of Knutsford Road, Alderley Road, Parkway were also covered.  One of our volunteers collected 2 bags at the entance to Carnival Fields and on the roadside near Lindow Common. We collected about 17 bags.

The station forecourt wasn’t too bad thanks to the efforts of the Northern Rail staff who clean it most days.

We were particulary disappointed by the state of the pond near the Leisure Centre, the surrounding woodland and the paths that run inbetween the cricket pitch and the Broadway Car Park. There was so much litter. It is clear that people are drinking on the benches around the pond and then throwing their cans and bottles into the pond.  The area immediately outside the Leisure Centre is really bad too – littered with cigarette ends – surely this area at least should be maintained by the company running the centre?

Anyway – a good start to the year with 26 bags collected altogether this month so far.