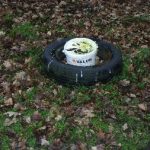 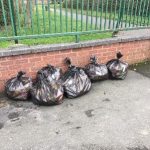 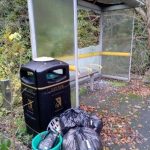 8 volunteers met at The Honey Bee on Saturday 9th November. We picked along the A538 (Altrincham Rd) and collected a total of 16 bags plus various hub caps and other items. Viv, who regularly picks in this area, reported that “It was absolutely dreadful – I’ve never seen it so bad”. 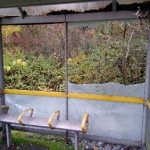 We were disappointed to see that the glass in the bus shelter (near the Airport Inn Hotel) had been vandalised. We have asked our contact at Cheshire East to report this to the relevant department.

Anyway –  at least 26 bags at our 2 scheduled picks contributing to a total of 38 over the past month.

Well done everyone – see you in December 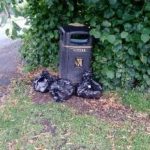 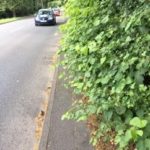 Sally, one of our volunteers, represented Wilmslow Clean Team on a walk around the town to identify problem areas and creating a wish list of suggestions that will make the town look better.  Ansa, Cheshire East Council and Wilmslow Town Council and Incredible Edible were also represented.
Here are a couple of litter related suggestions :
It was good to hear everyone passing on their thanks for the work that the Clean Team are doing

We got together for an extra litter pick today.  This was to clean the town in preparatation for the judging of the Britain In Bloom 2014 competition (the judges are in Wilmslow on 10th July).

Only 5 volunteers were available but we did a good job and covered a large area – most of the focus was on the route that the judges will take.

The areas covered were :

We met at the Boddington Arms and then concentrated on the route that the judges will be taking. So – the focus was on the following areas :

We collected about 7 bags of rubbish.

It looked as though the town had undergone more cleaning work than we have come to expect because the town centre seemed cleaner than normal.  This could well be down to some of the recent scheduled litter picking events by the Clean Team though.

We did spot a council road sweeping vehicle cleaning the gutters in Racecourse Road this morning.  This activity has become almost non existent in Wilmslow.  It makes a massive difference in terms of the appearance of the roads and in the prevention of problems with the storm drains.  It is a shame that it takes an annual competition for a limited amount of this activity to be performed in our town.

Thanks and well done to all today’s volunteers.   Hope to see you all in the Coach & Four later tonight for our social night.

Some representatives from Wilmslow Clean Team will be at the Cheshire Show on 17th June 2014.  We will be on the Cheshire East stand which is inbetween the band stand and the main ring.

We are helping Cheshire East to promote the region as a great place to live and work.

It will be a good opportunity for us to promote the voluntary work that we do.

If you are attending the show then please come and find us – we would be pleased to tell you more about the Wilmslow Clean Team.