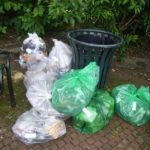 On Wednesday 6th July, 10 volunteers (including two new volunteers from Yorkshire Building Society – Michelle and Rebecca) met at Bank Square and collected 14 bags of litter. Some bags of flattened cans were taken away for re-cycling.

Other volunteers collected an additional 3 bags of litter in various parts of Wilmslow including Gravel Lane, Knutsford Road and Priory Road,

Many thanks to the Yorkshire Building Society for their help with the litter picking – and their involvement in the dramatic rescue of a hedgehog at Wilmslow Leisure Centre. 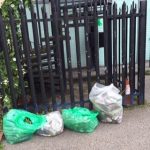 We asked Tesco Express if they would arrange to clear the rubbish which has accumulated over many years at the foot of the external fire escape metal staircase. The issue is that litter has been pushed through the railings which guard the staircase, so is totally inaccessible without the gate being open, but which is also highly visible. Fortunately, the gate was open today for some maintenace work. A member of Tesco’s staff, Sharon, took immediate responsibility and said she would clear the litter immediately. 2 of our volunteers, Colin and Chris offered to help, and, between us all, we filled 4 bags (see photo)! Sharon said she would now keep an eye on this area and clean when necessary, each time the maintenance engineer arrives.

Finally, in an eventful morning, another of our volunteers, Sally, picked up a donation of £295 from Waitrose as part of their “Community Matters” programme.  We are very grateful for this money as our funds were running a bit low.

7 bags of litter were left for collection by the Barlow road entrance to the park and some flattened cans were taken for re-cycling.

So – 24 more bags of litter removed from the streets of WIlmlsow. Well done everyone!

Thanks once again to our volunteers and to the businesses who support our efforts. 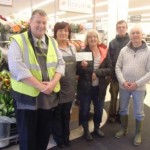 We were delighted to receive a cheque for £540 from Waitrose as part of their “Community Matters” programme.  We would like to thank everyone who used their tokens to vote for us.  The money is very welcome as our funds were getting a bit low.  Equally important is the recognition that we are a valued group within the town and the extra exposure to the work that we are doing to improve Wilmslow.

7 volunteers turned out for the first litter pick of 2015 – split into 2 groups.
2 of the volunteers targetted The Carnival Fields, collecting up lots of bags of general rubbish, some larger items and a couple of matressess!
The other 5 met in Bank Square and focussed on the town centre. The areas covered include Church Street, Grove Street, Alderley Road, Grove Avenue, Hawthorne Lane, Manchester Road, Green Lane, Swan street, Hawthorne Grove, the railway station, the Leisure Centre and St Anne`s Parade.  They collected around 6 bags of litter and returned 2 shopping trolleys to Waitrose.
Well done everyone !