We held 4 litter picks during the 2017 Spring Clean Week.  We collected at least 61 bags of litter + some recyclables – so a brilliant effort all round. 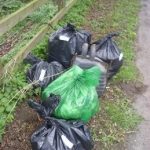 Some sparkling weather was welcome on Monday 27th March. 2 new volunteers (Alison and Sara) were amongst the 10 who met at Wilmslow Garden Centre. This was a new venue for us. We collected 24 bags plus 3 bags for recycling. We also alerted ANSA to the carcass of a badger on Stanneylands Road. We covered Manchester Road (from the Blue Bell crossroads north to the boundary with Handforth, and the woodland near this boundary), Dean Drive, Courtney Green, the Arthur Boon park, the un-named cul de sac adjacent and Stanneylands Road (between the hotel and the Styal parish boundary at Linney Bridge, and for some distance up the hill beyond the boundary). Because we have never covered some of this area before there was a lot of very old, deep-seated, litter, especially in the woodland around the park, and down the cul de sac road past the building used by the Army and Air Force cadets, towards the railway viaduct. We heard from a passer-by that someone is regularly fly-tipping drink cans down there.

On Tuesday, one of our volunteers, Sheila, collected 3 bags and a wheel trim on Alderley Road (and the surrounding streets) between the bypass roundabout and the Kings Arms. Donkey Lane and Fulshaw Park. 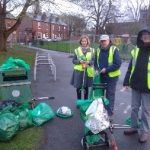 8 volunteers met at the Parish Hall in the evening on Wednesday 29th March. We were pleased to welcome another new volunteer (Julie). We collected 10 bags and some recyclables. We focussed on surrounding area including The Carrs, Cliff Road, Styal Road and Bollin Hill. We then headed off to The King William for a drink and a chat.

7 volunteers gathered at the Unicorn Pub on Adlington Road on Friday 31st March. We  collected 12 bags of litter from in and around the Dean Row area.  Again – this was a new location for us. We covered Lees Road (on both sides down as far as the Wilmslow boundary), Adlington Road (down as far as Browns Lane and then into Cross Lane), Chapel Road and Woodford Road (down as far as the Wilmslow boundary). It was great to welcome 2 local Dean Row councillors : Ian Furguson and Frank McCarthy.  We would also like to than the landlady of the Unicorn for kindly offering us tea or coffee which we enjoyed when arrived back at the pub. 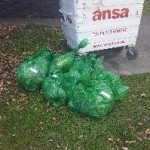 On Sunday 2nd April, 5 volunteers met at Sainsbury’s and we were so pleased to be joined by a 12 year old girl who had read about the Spring Clean and brought her mum along – what a star!  We collected 11 bags altogether. We would like to thank Sainsbury’s for the free ice creams that they brought out – very welcome on a warm afternoon. Thanks to the Coach & Four for the offer of free teas – most of us had to dash off – so apologies if no-one turned up. We also heard that Ruth and Rod had collected a bag of litter from in and around the Rectory pond and from the wilderness by Sainsbury’s car park – much of which they took home to recycle.

Many thanks to everyone who helped during the week either on the organised litter picks or individually.  It was especially nice to welcome some new volunteers.  Thanks also to the local businesses who offered us support (parking, refreshments etc).