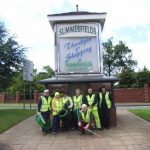 On Wednesday 7th June we met at Summerfields.  There were 8 Clean Team volunteers and 3 employees from Riverside.

A total of 22 bags of litter were collected.

On Saturday 10th June, we met at The Farmer’s Arms and spread out covering the Chapel Lane, Altrincham Road and Knutsford Road areas. Despite the miserable weather we had a total of 7 volunteers who collected 7 bags of litter

So – a good haul of 29 bags altogether,  Thanks to everyone who attended the picks.