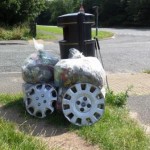 We have completed both of the 2 litter picks that were scheduled in for August 2015 (we pick on the first Wednesday of each month and the following Saturday).

We also covered the old road beyond the Britannia Airport Inn where we found dozens of nitrous oxide cylinders.  There has been more fly tipping in this area – which is an ongoing problem.

We would like to thank Leanne Harrad from Holiday Inn Express who came along to help.  It’s great to have some assistance from the business sector.

Thanks also to the Honey Bee for letting us park – and for keeping the area around the pub clean. As the manager says – “It’s just good business sense”.

16 bags of litter were collected altogether on Wednesday.

7 volunteers met at the Parish Hall on Saturday 8th. One of our volunteers tackled Carnival Fields and Altrincham Road on her way to the Parish Hall.  We spread out in various directions including the area near the King William pub, Manchester Road, and the pathways by the Bollin and along the railway line. 8 bags were collected altogether.

2 other volunteers went over to Prestbury Road – which was remarkably clean compared to normal. We therefore went further afield down Hough Lane and Adlington Road.  4 bags and 2 hub caps were collected in this area.

As usual the council have been informed and will pick up the bags that we have left for them.

So – a grand total of 28 bags at the organised litter picking events in addition to the ad hoc litter picking that our volunteers perform every month.