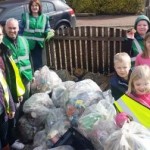 5 volunteers met at the Leisure Centre on Wednesday 4th March and collected a total of 12 bags of litter.
It was disappointing to see the state of the astroturf football area at the Leisure Centre – 3 bags were collected there alone. There was also a lot of broken glass and laughing gas canisters in that area too. The pitch is no longer rented out and it seems that maybe the organisation that runs the Leisure Centre are not taking responsibility for the upkeep of the area.
A lot of litter was found in the border of the Leisure Centre car park and Alderley Road.  Some shrubs have been cut down in this area and a lot of litter was recovered.  We were disappointed by this as we thought that we had removed most of the “historical” litter from this area.
On Saturday 7th March, 5 volunteers from Wilmslow Clean Team met up with a task force from Friends Of Lacey Green Park. We met by the park entrance. The Friends concentrated on the park itself, collecting litter and spraying dog poo yellow.  There is a serious dog poo problem in the park.  The Clean Team spread out around the surrounding roads and paths.  Between us we collected a massive haul of 29 bags plus some other random objects (e.g. the back of a television).  The Friends brought some of their children along.  It was great to see them  involved on this task, especially as they were all really enjoying themselves and thoroughly aware of the problems litter causes.
So – a good start to March with a total of 41 bags collected.
Plans are almost complete for the 2014 Spring Clean Week later in the month – so the monthly total will shoot up.
Well done everyone