Four formal litter picks were organised by the Wilmslow Clean Team during our Spring Clean week which ran from 1st April to the 7th April 2019. Some of our volunteers also contributed by going out on their own. Our spring clean fell nicely into the month long “Great British Spring Clean” initiative organised by Keep Britain Tidy 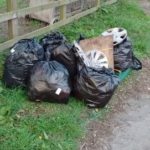 10 volunteers met at The Unicorn in Dean Row on Monday 1st April for an hour long, evening pick. We focused on the surrounding area.  Some volunteers headed off to Summerfields.  Another drove further afield and picked from Prestbury Road, down to the Bollin and up as far as Wilmslow Park North – an area we haven’t covered much before and which was particularly bad. We collected 15 bags altogether and some hub caps. Some of us enjoyed a well earned drink in The Unicorn afterwards. We were very pleased to welcome 4 new volunteers. Thanks to The Unicorn for allowing us to use the car park.

On Wednesday 3rd April we met at Lindow Common. 11 volunteers collected 16 bags in the surrounding area. Again, we were delighted to welcome a new volunteer. 6 of us went to the Boddington Arms afterwards. We would like to thank them for providing us with a complementary hot drink – it was really appreciated. 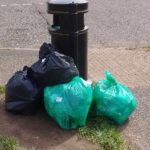 9 volunteers met at The Kings Arms on Saturday 6th April. We covered the surrounding area including Alderley Road, Knutsford Road and Chapel Lane. 2 volunteers drove further afield and picked Prestbury Road.  10 bags were collected altogether.  We would like to thank the Kings Arms for the use of their car park and for the offer of a hot drink (although I think we all had to head home after the pick). We reported some fly tipping on Prestbury Road to ANSA 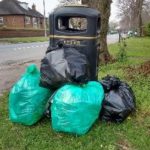 Our final Spring Clean pick was on Sunday 7th April. 7 volunteers met at Wilmslow Garden Centre. We covered the surrounding roads and woods. 2 volunteers drove down Stanneylands Road and covered the area from the hotel, down to the river and up the other side. This area was one of the worst we have seen. It’s not an area we cover very often but we very quickly filled 4 bags of litter and a whole bag of recyclables. The litter was just everywhere in what is a really picturesque part of the town. It’s possible that the huge house building exercise is contributing to the problem – we will have to monitor this situation. We collected 14 bags altogether along with a few hub caps. Thanks to the garden centre for the use of their car park.

Thanks to everyone who came to the litter picks or supported us in other ways in what was a very successful Spring Clean.

As well as running our own litter picks, we have also been pushing ANSA to litter pick the A34 bypass.  We were pleased to see this happening last week.