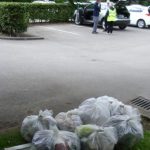 10 volunteers met at The Honey Bee on Wednesday 3rd August.  We focussed on Altrincham Road from the Jim Evison playing fields to the airport tunnels, the whole length of Morley Green Road, the green at Morley Green and the old road near the Britannia Airport Inn.  We collected 13 bags of litter along with some polystyrene, a lorry mud flap and 2 lengths of industrial plastic.

Our environmental efforts continue to impove as a whole bag of plastic bottles and cans was taken home for recycling.

8 volunteers met at The Parish Hall on Saturday 6th August.  We focussed on the Carrs and surrounding roads (e.g. Styal Road, Cliff Road). 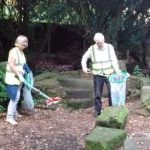 A member of the public had contacted us about the litter probelm at St Olaf’s Chapel.  3 of our volunteers (Ade, Sally and Chris) headed to the chapel which is a ruin in the woods above the Carrs. We cleaned the litter along the path and around the ruin itself.  There was some litter – but not as much as we were expecting.  It was interesting to discover the old ruin though.

We collected 13 bags of litter and also took home some cans and bottles for recycling.

A health total of 26 bags of litter and some recylcables – well done everybody!