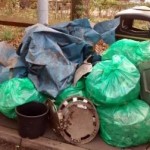 Several of our volunteers do stirling work themselves inbetween our 2 formal monthly litter picks.  A great example this month was a tremendous haul of litter and rubbish collected by Ann in the area between the Honey Bee and Morley Green nursery.  This extra effort was to tidy up the part of Altrincham Road that the team couldnt finish on the Saturday litter pick.  She also collected a bag on Knutsford Road.  All the rubbish was taken to Sainsbury’s car park and the coucil were notified for collection. 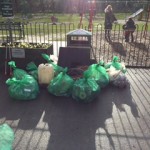 A good turnout of 7 volunteers met at the Parish Hall on Wednesday 3rd February.

We covered the Parish Hall car park, the back of the Parish Hall, the children’s play area, par of The Carrs, Cliff Road, the steps from Cliff Road up to Bollin Hill, Chancel Road, River Street, Old Road, part of Manchester Road (including the roundabout by the King William), and Mill Street.

There was a lot of rubbish by the trees leading towards the river (behind the tennis courts), including a few N2O mini-containers.

Another of our volunteers covered Lindow Common, Altrincham Road and the town centre.

We collected 13 bags of litter altogether plus a lot of old bits of wood and metal, 2 hubcaps, and a large plastic container of what is probably used engine oil.

Thanks once again to Holiday Inn Express (Manchester Airport) for their help on our litter picks. 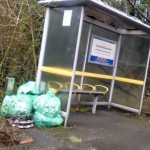 6 volunteers braved horrendous weather on Saturday 6th and met up at the Honey Bee,  We don’t think that we have ever been so wet after a litter pick.

We focussed on Altrincham Road between Waters and the airport tunnels, the paths and lanes near the Brittania Lodge Hotel, and Morley Green Road.

There is always plenty of rubbish in this area and we collected 15 bags altogether along with several hub caps, a traffic cone and a Christmas tree! 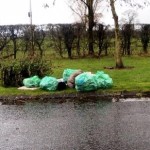 The rubbish has been left at the bus stop near the hotel and in the lay-by near Quaker Cottage ready for collection by the council (who have been informed).

So – 28 bags collected altogether in the February litter picks.

Watch out for details of the Spring Clean which is being planned by the committee. It will run from 29th Feb -> 6th March.