6 volunteers met at the Parish Hall on Weds 1st April.  We spread out in all directions and collected 10 bags of rubbish.  The locations that we tidied up included the steps from the Parish Hall up to Bollin Hill, the Carrs play area, Cliff Road, Styal Road, Manchester Road, Swan Street, Hawthorn Lane, the Memorial Gardens, Mill Street, the road from the King William down to Polar Ford, and the Leisure Centre.

We collected a lot of broken glass in the skateboard area in The Carrs. We also found over 50 laughing gas canisters near the river near to Polar Ford.  The hedgerow between the entrance to the Broadway car park (near the Leisure Centre) and Broadway itself was filthy. 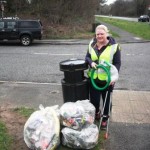 6 volunteers met at The Kings Arms on Sat 4th April.  Again we spread out in various directions and collected 11 bags of rubbish. 2 volunteers drove off to Prestbury Road. This stretch of road is always full of litter and we collected 4 bags there.  Other areas covered included Alderley Road (although the discarded duvet near Royal London was a bit too big for us to deal with), the roundabout where Alderley Road meets the A34 bypass and the Spring Street Car Park.

We also ventured into Alderley Edge a bit and tidied up Brook Lane (including the path to the Alderley ByPass) and the public footpatch heading into the fields from the roundabout where Wilmslow Road meets the A34 bypass.

So 21 bags of litter altogether.