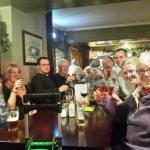 A few of our volunteers got together at the Coach & Four in Wilmslow tonight for some Christmas drinks.  It is just over a year since our very first litter pick.  Despite only having a small number of dedicated volunteers we have had an amazing year collecting about 650 bags of rubbish. We have worked hard throughout the year but we have made time for social events too. The Coach & Four made us very welcome tonight and even gave us a bottle of fizz which we really appreciated.

Happy Christmas to all our volunteers and supporters and here’s to an equally successful 2015!

6 volunteers met in Bank Square on a wet morning for our last litter picking event of the year.  As well as being a busy morning for Christmas shoppers it was also Artisan Market day – so hopefully our presence in the town centre was noticed and we might attract some new volunteers.  We decided to do an hour’s pick today (rather than the usual 2 hours) but we still managed to collect 9 bags of rubbish and the odd hub cap. This has been left in Bank Square for the council to collect.

We covered various roads in and around the town centre including Bank Square, Grove Street, Station Road, Alderley Road and Water Lane.

We all then retired to Hawthorns Deli for a nice warm drink, some cake and good chat.

Well done everyone and hope to see you all in the Coach & Four on Monday night for our Christmas drinks.

Sally, one of our volunteers, represented Wilmslow Clean Team on a walk around the town to identify problem areas and creating a wish list of suggestions that will make the town look better.  Ansa, Cheshire East Council and Wilmslow Town Council and Incredible Edible were also represented.
Here are a couple of litter related suggestions :
It was good to hear everyone passing on their thanks for the work that the Clean Team are doing

The first 2 of our December litter picking events have gone well – with at least 20 bags of litter collected.

7 volunteers met at the Kings Arms on Wednesday 3rd December.  2 volunteers concentrated on the grounds of the disused Remenham council offices (owned by Cheshire East Council until March next year) – particularly the boundary fence bordering Alderley Road where large quantities of litter had been dumped over the fence.  Various home made advertising boards that had also been thrown over the fence were also collected up.  The other 5 volunteers covered the surrounding roads including Albert Road, Victoria Road, Sainsbury’s car park and the hedge opposite the BP garage.

5 volunteers met at the Honey Bee, on a bright and frosty morning. on Saturday 5th December.  We covered Altrincham Road (between the airport tunnels and Nansmoss Lane) as well as Morley Green Road.  We collected a staggering amount of rubbish, over about a mile of road, considering we have done this area before.  A total of 15 bags of rubbish were collected. This has to be down to people throwing litter out of their vehicles.  In addition to the litter we also collected old road signs and vehicle parts.  It was interesting litter picking with a hard frost – a lot of the litter was frozen to the ground!  It was nice to welcome a new volunteer too.

Our next pick is on Saturday 20th December.